Reviewer: Tahoe Bob - favoritefavoritefavorite - May 11, 2007
Subject: Mic location
I talked to the taper of this and the 4/21 show, which is also posted to LMA...his mics for both shows were mounted to the pillars in the balcony, stage left about 1/2 way back.

Reviewer: efojr - favoritefavorite - May 9, 2007
Subject: Not for the critical ear
Ratings here are for the recordings and nothing else. Try not to get too emotional about it.

Love a fresh show but I suggest streaming this and not wasting the discs.

Not worth two listens IMHO. Listen to the recording of rre2007-03-31 (another noisy crowd show) and you'll see the difference a good rig can make.

Y'think these folks got to hear the band all the time with all the chatter they spew!

Reviewer: jerryil - favoritefavoritefavoritefavorite - April 30, 2007
Subject: Long Time Listener, First Time Poster
Here's the thing. I was at these shows, and there were no mics "above" anywhere. I am assuming this recording came from crowd level. As far as hearing the band. I heard them LOUD AND CLEAR! The GAMH is one of the most beautiful small indoor venues anywhere. There was only one time all weekend when two people were directly in front of me talking. Yeah, it was annoying. Here's what you do...... move, it's far easier than getting pissed and whining about it. I will download these SBDs if they become available, but until then, Thank you for keeping the memories alive!

Reviewer: Redheaven - favoritefavoritefavoritefavorite - April 29, 2007
Subject: Church of RRE
Great show with lots of emotion. Agreed that this was the first time as a west coaster where the chatter was pissing me off. I had to find space in the room where folks would shut up so I could go to freakin church. =)
Im still really happy this was put up to enjoy. im glad I wasnt the only one annoyed at the gabbers!! But RRE spirit kicked thru.....

Reviewer: Elko - favoritefavoritefavoritefavorite - April 27, 2007
Subject: Great American Chat Hall
Just like all Railroad Earth shows, you have to talk really really loud to be able to be heard over the band. With no sbd access, the taper records all the noise in the room and tries to clean it up after. Considering this crowd, he did a great job. Thanks for making this great 420 show available to us.

Thanks for the fast post. It's making my worday much more enjoyable to relive the great music of this past weekend 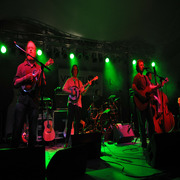 Uploaded by goodkarmechanic on April 22, 2007